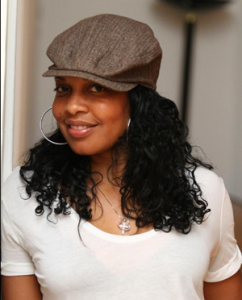 Sahar Simmons, a native of Brooklyn, NY is no stranger to hard work and creating lanes within several major industries. Her passion for music and performing started at a young age. She attended the prestigious Fiorella LaGuardia School of the Performing Arts (FAME) as a trained singer. It was there that her love for performing on stage and creative arts evolved. Although her initial aspirations were to perform, she quickly developed a desire to write and create from behind the scenes.

After graduating from Hampton University, with a major in Communications, Sahar started her career in the sports industry, working for the US Olympic Committee and continued on to, TNT Sports, the NBA (Atlanta Hawks) and NFL (Atlanta Falcons). She was responsible for writing media content and has organized and executed major special events for the NBA and professional athletes.

Sahar’s continued love for writing and producing propelled her to pursue film and relocate to Los Angeles. She landed her first position working as the Director’s assistant to Michael Mann. She has continued to work for some of Hollywood’s top directors, actors (F. Gary Gray, Malcolm Lee, John Travolta, Uma Thurman, Samuel L. Jackson, Ice Cube, Cedric the Entertainer and Brandy) and major motion TV/Film productions; Be Cool, Collateral, Roll Bounce, MTV Punk ’d and Barbershop 3. Upon returning to the East Coast, Sahar decided to return back to the East Coast in order to take advantage of the budding film industry in Atlanta. She has since developed, and produced Briana’s Neighborhood children’s brand and cartoon. Briana is a socially conscious eight year old girl from Brooklyn, NY who is affected by her surroundings and environment. Some of the areas of discussion for kids in Briana’s Neighborhood include: bullying, self-esteem, peer pressure, green awareness, physical fitness, homelessness, disabilities and literacy. The enthusiasm of Briana’s Neighborhood has been supported by major partners. Her community involvement includes maintaining literacy partnerships with corporations such as: McDonalds, Carol’s Daughter, Macy’s, Chick fil- A, the WNBA and NBA Leagues.

Sahar’s continued desire to create a unique niche in the TV/Film industry led her into the costume department. Her love for overall fashion and keen business sense presented opportunities to introduce and develop relationships with up and coming costume designers for TV/Film projects. She is also one of the creators of the Fashion Before Food Collective, a brand created to highlight wardrobe behind the scenes in TV/Film, in addition to creating a roster of talented sought after costumers and designers.

Sahar dedicates her time to giving back to kids. She volunteers and conducts writing workshops and empowerment programs for youth. Her community involvement has been recognized by Rolling Out Magazine as one of the 25 “Most Influential Women” and Who’s Who of Black Atlanta Publication. Simmons was also the 2010 Wells Fargo Entrepreneurial finalist and the 2012 Echoing Green Business Leader finalist.

Sahar, is also the founder of the Briana’s Neighborhood Dare to Dream Foundation, a nonprofit organization serving youth from multi-cultural backgrounds who “dare to dream” and achieve success.